That’s the thing about marrying a man you met while at a work conference in Las Vegas. You know, he tells you all the important stuff about himself, but your mind kind of glosses over it because your hormones are making you giddy, and the sex is freaking fantastic.

I mean, seriously, —Fan. Tas. Tic. I’m talking about sex so mind-blowingly good that it ruins you for all other men because the probability of finding another fella that talented is like reading the odds on the back of a Powerball ticket. Getting all of it right is like 1 in 200,000,000.

Anyway, you’re sloppy in love and this gifted man explains his important stuff to you yet again, but this time with a paper contract outlining his terms, because that important stuff is really, really important to him. And because you’re in love, you sign the contract and agree to abide by it, and you even repeated the word “obey” at the quickie walk-in-chapel wedding ceremony. After all, you can tell that he’s a good man, and he’s promised you everything you could ever want and/or need, and you know that he can deliver it—if only you can accept this one tenet in your relationship.

What’s a little spanking between husband and wife, right?

Behave, there’s no discipline. Misbehave, and hubby will bring on the discipline.

All fair and reasonable.

Well, six months of blissful marriage passes before something bad happens, and you’re standing in your bedroom frantically scanning the terms of that signed contract, because earlier that day, you got yourself arrested. Your new husband bailed you out and now you’re both back at home, and he’s standing there—with a huge wooden paddle—demanding that you bend over so he can bring down the wrath of God upon your ass.

So much for fair and reasonable….

“Fuck.” I muttered, crumbling the contract in my fist. “Fuck. Fuck. Fuck!” I really should have read the damn thing better.

“Gah!” I stomped my foot. “What else am I supposed to say? I’m the one on the receiving end of this!”

“Damn right,” he exclaimed. “You were the one arrested for reckless driving.”

“It was an accident.”

“Forty miles over the speed limit in an active school zone is not an accident. It is negligence.”

“It was five minutes before the restriction ended!” I explained for the zillionth time. “There were no kids!”

“Okay, that cop was being a total ass.” I tossed the ball-o’-contract onto the bed. “I’m sorry I didn’t think to look at the clock before I entered the area. Like I said, I didn’t see any kids. And it was literally five minutes before 15 turned into 45 miles per hour.”

In true HoH fashion, or what I imagined that to be since I was new to this, my husband crossed his arms and shook his head. “Not a valid excuse. Especially since you were clocked at 56. That’s still eleven miles over the regular speed limit.”

Ah, the tone. He gave me the tone. The “this is final and I will not be deterred” authoritarian tone.

Swallowing my exasperation, I flicked my gaze to the wood paddle he held in his hand. “Really? You’re really going to beat me for this?”

Though he masked his expression, I saw the hurt flash in his eyes all the same. It was a low blow on my part, I know, but I couldn’t help it. This all seemed so unfair to me.

“Discipline would be the proper term,” he said with admirable restraint. “Correct would also work. And yes, I believe a paddling is in order.”

Mimicking him, I crossed my arms and glared back. “Me going to jail wasn’t punishment enough, huh?”

Silence. It was the ultimate stare-down.

Looking at him holding that instrument of pain—a weapon, if I wanted to be nasty about it—was affecting me more than I cared to admit. My day had been horrible enough without this added to it. Arrested, booked, a few hours in jail, a court date…

Funny, a therapist once told me that when we stress, we regress. So if the sudden stinging in my eyes and the nearly overwhelming urge to stomp my foot and sling cruel, careless words were any indication of that datum, I was losing maturity at an alarming rate. And the lingering silence was only encouraging the relapse.

“If you’re afraid, sweetheart, just say so,” he offered.

I inhaled a shaky breath and pressed my closed eyes so I would not give the asshole the satisfaction of seeing me lose it. Damn him. He would not break me. I wouldn’t let him.

When I recaptured my composure, I dropped my hands, fisted them at my sides, and straightened my spine.

With as much dignity as I could muster, I continued. “—I might lose my driver’s license, my car insurance, and I might go to prison. I’ll lose my job. But you—all you can think about is spanking me with that stupid paddle! What the hell is wrong with you?” I swiped the angry tears off my cheeks before asking, “Do you not love me at all?”

He exhaled heavily, laid the paddle on the dresser and came toward me.

“Don’t,” I whispered, backing away and shaking my head. “Don’t you dare touch me.”

I retreated, not because I thought he was going to hit me or anything, but because I knew if he touched me, if he took me into his strong arms and enveloped me in that light cologne scent that I loved so much, I would bawl like a baby. That was the frustrating part. He could disarm me and crumble all my defenses with one good hug.

“Come here, sweetheart,” he said, trying to gather me close despite my efforts to thwart him. “It’s okay.”

And poof, there went the rest of my maturity, along with the rest of my composure. He pulled me to him and, like an overtaxed dam, I ruptured, pouring all my turmoil into his chest while he held me tight and whispered that everything would be all right.

For the most part, I was blessedly numb, just content to indulge in the warmth and security of his embrace where I felt protected and loved and cherished. But as the sobbing quieted into the occasional hiccup, I knew I would have to return to the real world and face the problem at hand.

The discipline contract was very clear concerning our marriage. I either willingly submitted to his discipline, or I refused to submit to it. But that refusal came with a price: we would file for divorce as soon as feasible.

Asshole. While the two choices sucked balls, they were choices all the same. I didn’t have to let him hit me. I could just get up and walk out. He wouldn’t stop me.

The worse thing about the stupid contract was that he wasn’t trying to force me to endure anything that I hadn’t initially agreed upon in the first place—in front of a notary, as proven by my initials beside each paragraph indicating I read every word of the damn thing, and my legal signature at the bottom that claimed I would abide by it. He wasn’t trying to exercise any power over me that I hadn’t granted him.

I entered the contract, consented to the relationship. I guess I just didn’t get…

“Why you want to spank me so badly…?”

He exhaled heavily. “I don’t want to spank you.”

He actually smiled at that, tenderly smoothing back the strands of hair that hung in my face. “Oh, sweetheart. I do. What kind of man would I be if I didn’t live up to my responsibilities and keep the promises I made to you? I love you too much to not spank you.”

“No, love. What you did was wrong and dangerous. And as old-fashion and politically incorrect as it might be in this day and age, it is my duty as your loving, doting husband to make sure this never happens again.”

“I promise it will never happen again,” I rushed, wiping my wet cheeks.

“I can ensure that on my own without you or your paddle.” I looked away, biting my lip to stop it from sticking out as if pouting.

“Listen,” he urged, capturing my chin and looking deep into my eyes. “I promised in our wedding vows to be true to you,” he whispered. “To love, honor and cherish you. To protect you and keep you…care for you. And by God, as long as we are married, I will keep everyone of those vows.”

I won’t lie, it was kind of hard not too swoon at his courtly chivalry despite being outdated and weird in this modern world. And yes, it was his way with words that got me to marry him so quickly in the first place. He was the first man I ever met that wanted to take care of me, not vice versa. He was a sweet, thoughtful, loyal, loving…

He had a sensitive way to him that always seemed at odds with his heavy-handed beliefs. A pure romantic, but a fucking stubborn spankophiliac. Who was like that?

“Hurting me doesn’t seem in line with those vows,” I finally said, resisting the lull of his pretty sentiments.

“I disagree. If my paddle descending upon your sexy derriere will ensure that, from this moment forth, you will pay attention to what you are doing when you are behind the wheel and not break another speed limit again for fear of having another round with this paddle, I will have honored my vows.”

“I know. But it wouldn’t be a behavior modifier if it didn’t.”

It was then that I realized—I could try to debate and argue with reason, I could cry and plead my case, but he wasn’t going to back down. He wasn’t going to change his mind. This was who he was.

“No.” I pulled from his hold and stepped back, shaking my head.

I paused, took a deep breath, then gazed down at hands worrying themselves against my queasy stomach, afraid to see his anger. “I’m sorry, but no. I can’t do this. I’m sorry, I…I just can’t. You can’t spank me.”

Dear Reader,
This morning, my fantastic husband of only six months bailed my sorry ass out of jail. I am grateful for that and for him. But now that we’re home, he wants to bring the broadside of a wooden paddle down on said ass as punishment for my behavior. And I’m not having it!
Seriously? A spanking? Oh, hell no. Needless to say, the fight is on.
Look, I love my husband more than words can express, but I don’t understand all this Domestic Discipline stuff. I’m trying to get my hubby to see reason, but he’s not budging, and I don’t know if I can let him correct me. I’m beside myself with heartache. What should I do?
Do I let our wonderful love story end here and now? Or should I buck up and bend over? 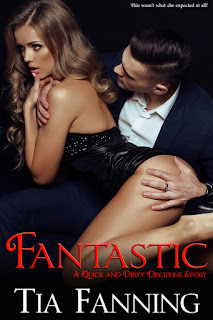